My current flatmate has a bunch of these HDMI extender devices (also apparently known as “LKV373” / “Lenkeng extenders” / “LK-3080-ACL”). They’re pretty nifty: HDMI goes in one end, they emit UDP over ethernet, and then HDMI comes out on the receiver end with surprisingly minimal latency (around 100ms). 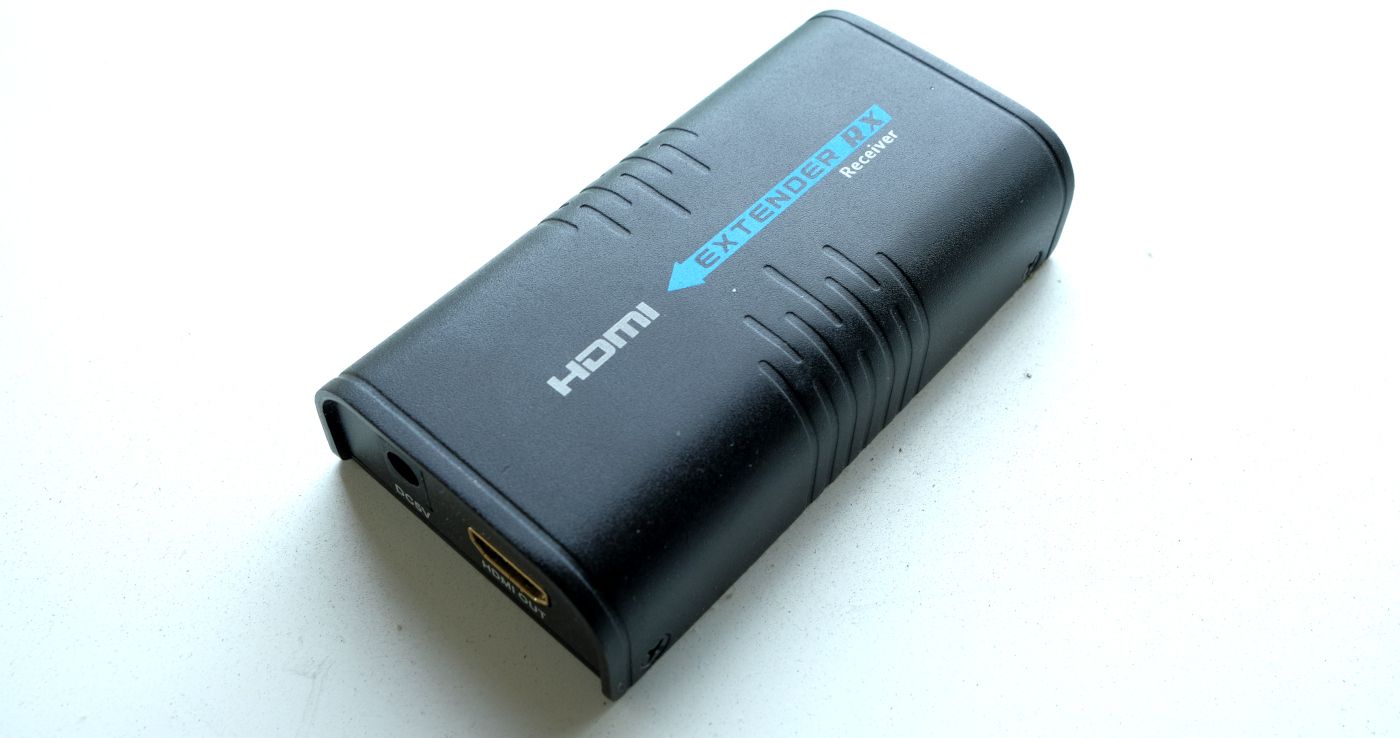 image: the receiver end of a transmitter-receiver pair, taken by said flatmate

A couple months ago we decided it’d be quite nifty to be able to play arbitrary audio out of the devices without having to plug a transmitter into someone’s laptop – so that we could have BBC Radio 4 or something constantly playing whenever the sound system is turned on.

My flatmate’s blog post, “Ludicrously cheap HDMI capture for Linux”, outlined a way to decode the signal the transmitters sent (using his own tool, de-ip-hdmi). But could we do the opposite, and encode signals the receivers would accept?

Testing without the actual devices

I figured I’d start by looking at de-ip-hdmi’s source code to see how it decoded the packets and then use it as a way to test the output of my custom sender until it was able to decode what I was sending. It’s pretty unlikely that I’d just be able to send audio without also sending a picture, so I tried to figure out the picture format first. 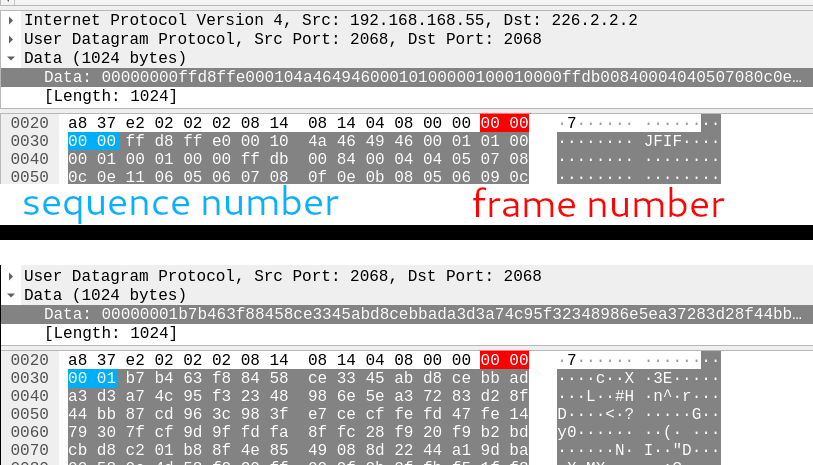 The video picture packets have a fairly simple format: two big-endian, 16-bit integers (frame number, and sequence number), and then data, up to 1020 bytes (making UDP packets with a 1024-byte payload, total).

Extracting the output from de-ip-hdmi with a transmitter running confirms that the data is just a JPEG:

The frame number counts monotonically up from 0, incrementing with each new frame. Since you’re not going to fit a whole JPEG frame in 1020 bytes, the sequence number provides a way of splitting the frame up into multiple chunks; you increment it for each chunk you send within a frame, while keeping the frame number constant.

The de-ip-hdmi source code to decode looks like this:

Seems simple enough. I wrote a small Rust struct that could chunk up a slice of bytes into 1024-byte vectors that fit this format:

I then made a little 1920×1080 all white JPEG in GIMP, wrote it to a file, and wrote some code to send out UDP multicast packets in the format the receiver (and de-ip-hdmi) would expect:

I added a suitable network interface for the sender to use (the actual flat networking setup uses VLANs for the HDMI traffic, but I found out that if you just want to test then adding a loopback interface also works):

With much anticipation I then ran the code for the first time, with de-ip-hdmi running in parallel – and got…nothing.

Turns out I forgot something else in the packet format: a way to signal the last chunk in a series of chunks for a frame. Going back to de-ip-hdmi:

With this change applied de-ip-hdmi would decode our image! Yay!

However, the real transmitter wasn’t having any of it; it refused to display a picture (behaving as if it couldn’t see any transmitters; it says “Searching TX” when this happens). 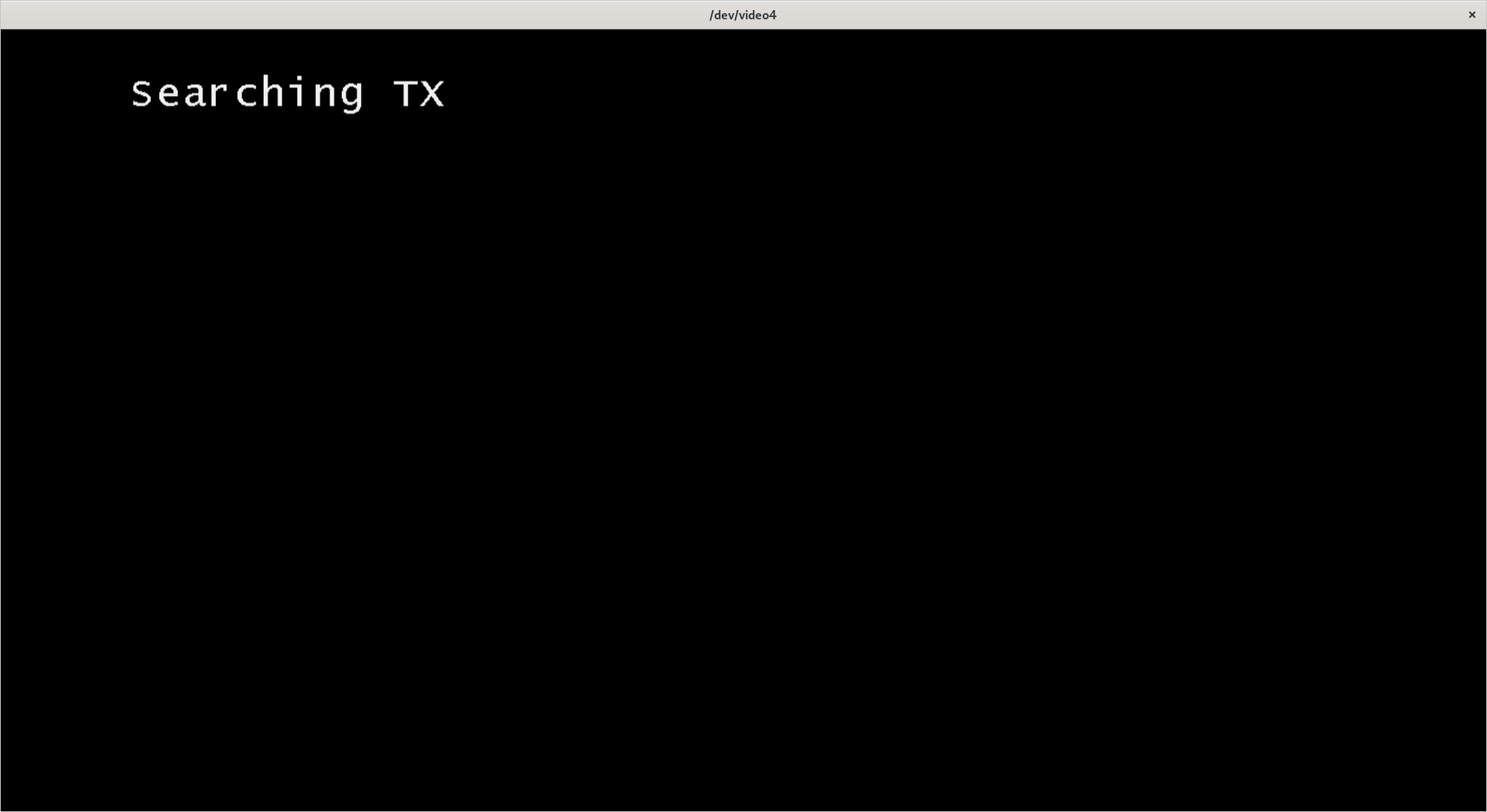 Let’s do the Wireshark again

I connected a real transmitter and dumped some of the packets it sends using Wireshark. Turns out there’s more stuff you need to do.

Here’s a screenshot of some of the packets the real transmitter sends.

Hmm, it’s all zeroes. What about the next one?

Turns out this pattern continues; before each picture frame is sent, an additional packet is sent on port 2067 of length 20, with the 5th and 6th bytes being a 16-bit big-endian integer, which is the same as the frame number of the frame we just sent.

I’m guessing this is a sort of “vsync” / “vblank” packet, used to tell the receiver to get ready for a new frame. We should probably replicate it, so I wrote some code:

Alas, this was not enough. The receiver continued to say “Searching TX”.

There are also some weird 512-byte payloads being sent on port 48689. These are easy to miss because they’re only sent once every second (and so are comparatively infrequent relative to the firehose of data the transmitters send for pictures and video). However, you can notice them by looking at the start of a packet capture since they get sent even when no picture data is being sent.

Let’s look at a dump of some of these packet payloads over time (using “[right click] Follow → UDP Stream” in Wireshark): 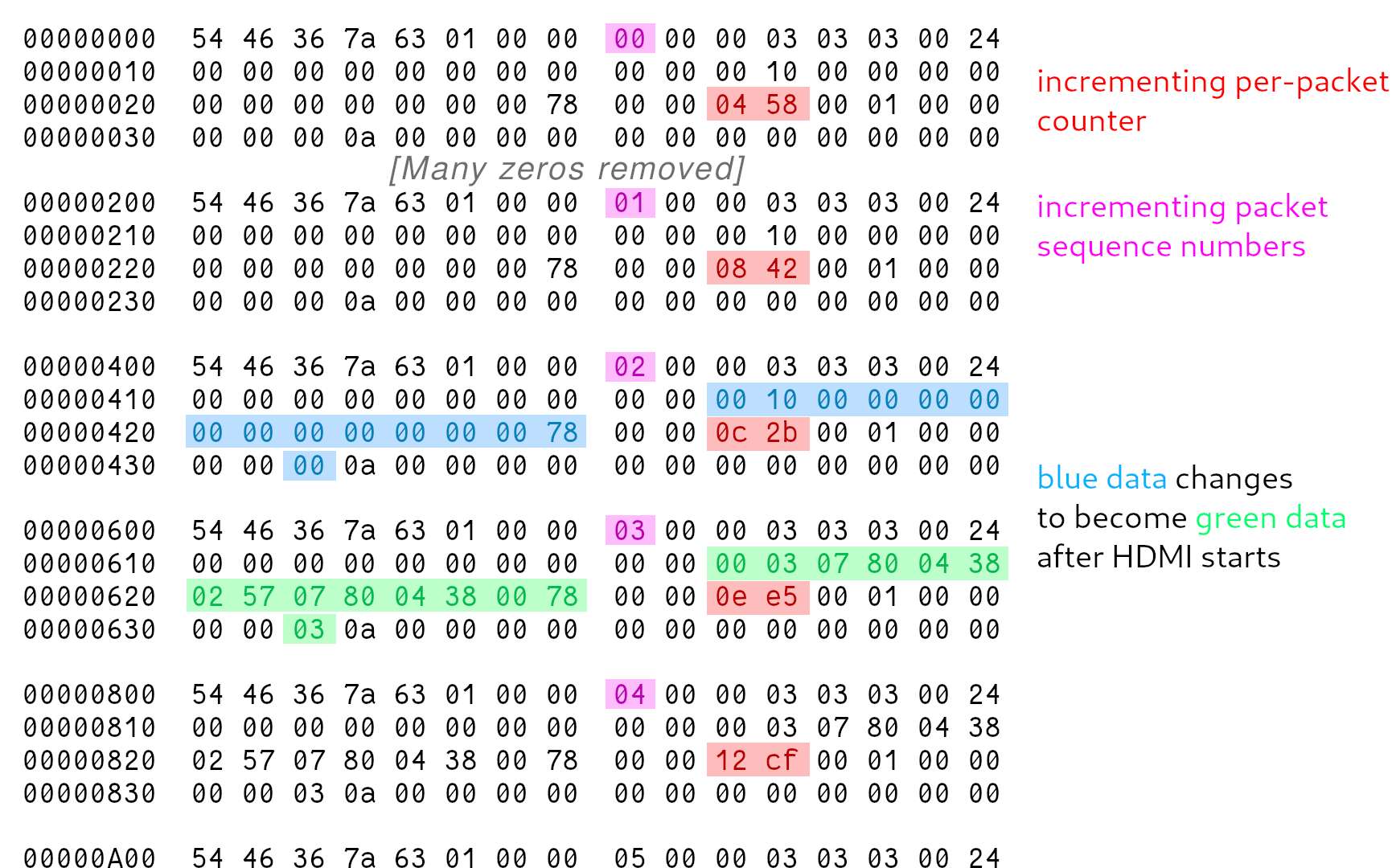 After squinting at it for a while, you notice a few things:

This must be some kind of heartbeat packet sent by the transmitter to tell the receiver that it’s there. Let’s try and figure out the various bits in the payload in more detail.

How is this counter being generated? Well, let’s assume that it’s a 16-bit big-endian integer, since everything else in this blog post has been that, and interpret the values accordingly.

I think it’s pretty reasonable to assume this counter just tracks time since the transmitter was powered on. Why the receiver needs that information isn’t exactly clear though (maybe for some synchronization purposes?).

Anyway, we should probably do the same as the transmitter when sending our own packets here so we’ll add a timer to the code.

We have two sets of weird data:

That seems familiar; isn’t 1920×1080 the resolution for 1080p? This data is presumably used to initialize the HDMI port on the other end.

What about when the HDMI is off? Well, it looks like most of the fields are just zeroed out, which makes sense since it doesn’t have a resolution or anything to send yet. (This causes the message “Check Tx’s input signal” to appear on the receiver, which is useful for debugging why the receiver isn’t displaying anything.)

In the end, I just encoded all of this data as constants (interpreting it as a set of 16-bit big endian integers), sending one set (the one with 1920s in it) if we’re ready to send data, and another set (the zeroed out set) if we aren’t.

Putting it all together

The code to make a heartbeat packet ended up looking like this:

Putting it all together and sending heartbeat packets, vsync packets, and the actual picture data… got the receiver to initialize, but output a black rectangle instead of the test image.

After trying many other things, I eventually tried sending the original test.mjpeg file I’d dumped from the receiver when first trying to get this to work, instead of my own JPEG that I made in GIMP. That actually produced some output!

(the test image was produced by writing some text on a laptop, making it full-screen, and connecting it to the transmitter)

But what about audio?

While this is (somewhat) useful, it doesn’t do what we originally wanted; what about actually sending audio?

How does digital audio work, anyway? 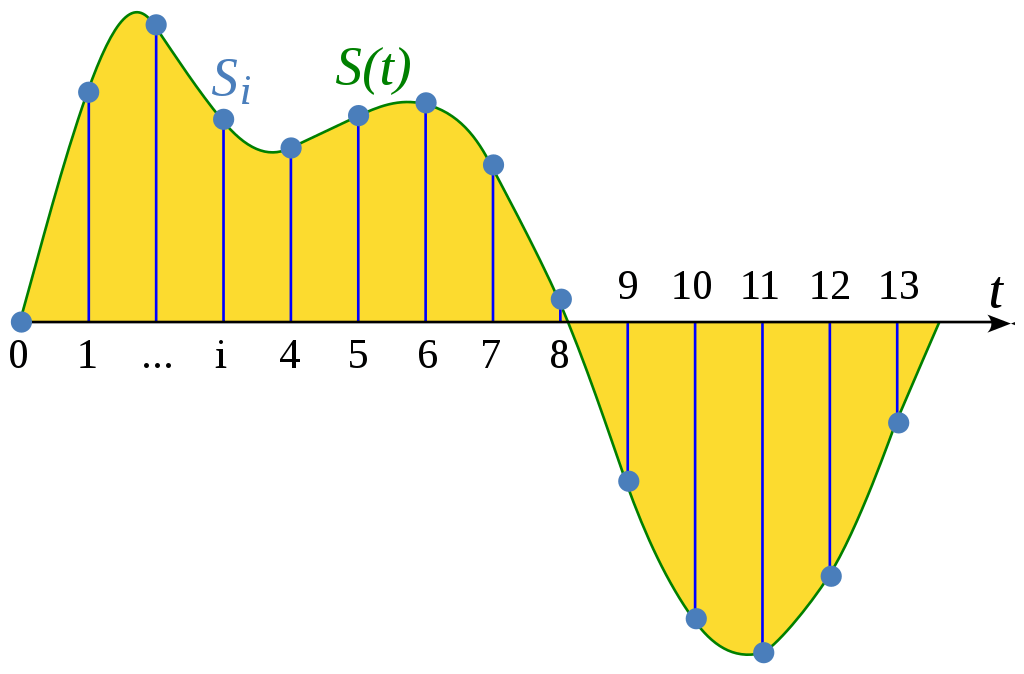 image: sourced from the above linked Wikipedia article, CC0

There are a number of important variables involved in this process that we need to know in order to send and receive audio in a given format:

What format do the extenders use?

de-ip-hdmi has already figured this out for us:

This is a ffmpeg command line that de-ip-hdmi uses to wrap the data from the extenders in a Matroska container (a way of combining audio and images together into one video file). We can tell a few things from this:

It looks like de-ip-hdmi just treats everything after the 16th byte as a set of samples in the above format:

Going back to our Wireshark dump, the first 16 bytes of every audio packet seem to be identical (and the packets are always 1008 bytes long):

However, how frequently should we send the packets?

That means we need to send a packet every 248 / 88200 seconds, or roughly 2.812 milliseconds (to 3 decimal places) – which seems to line up with the frequency observed in the Wireshark dump:

I wrote up some sample code that read samples from stdin (fed in using ffmpeg) and sent a packet, then slept for 2812 nanoseconds, and then repeated. This resulted in…complete silence!

That is, until we changed the device connected to the HDMI receiver unit (a hifi system with HDMI passthrough) to another device (a projector). The projector happily played the audio we were sending… but it sounded distorted (kinda “crunchy” sounding). What’s going on?

A while ago, I wrote some audio code for a project called “SQA”. This taught me one of the ‘cardinal rules’ of audio programming: jitter is unacceptable. There’s a great blog post called “Real-time audio programming 101: time waits for nothing” that explains this in more detail but to sum up: when supplying audio samples for playback, you have a fixed amount of time to fill a buffer of a certain size, and you must always fill the buffer in the time given to you (or less).

If you leave the buffer half-filled the audio will “glitch”: it’ll have pops and clicks in it and/or sound distorted, because the new samples you’ve only half written will stop halfway through the playback buffer and jump suddenly to a bunch of zeroes instead (or some other garbage data). This is called a buffer under/overrun, or an xrun for short.

So, how do you make sure you never glitch? Well, doing anything that could block or take lots of time to complete (reading from a file, waiting on a mutex, etc.) in the thread that handles audio is strictly forbidden; you’ve basically got to have something else put the audio samples in a ringbuffer for you to copy out in the audio thread.

Armed with the above knowledge, I completely rewrote the audio thread – and it actually works!

It now uses the excellent bounded_spsc_queue ringbuffer library to ship samples from the rest of the program and the audio thread, and spin-waits (loops) until it needs to send the next packet. (Doing the “proper” thing and using something like nanosleep(2) would be more efficient – but was unreliable compared to just spinning in my tests.)

The full audio thread code is below:

The code is here. Don’t expect miracles. (If you actually plan to use this, you might want to get in touch.)

There are a number of ways to feed data into it, which you choose at compile time using Cargo features. You can either feed in raw s32be samples from either stdin or TCP (it’ll make a TCP server and you can connect and send stuff, but not with more than one client at the same time…). I also ended up adding a JACK backend (using my own sqa-jack library), if that’s your thing.