(Edited 2019-08-06: added links to download the source code, and made a few minor language changes.)

I “recently”1 took part in the Weizmann Institute’s international “safe-cracking” tournament, as part of a team of five people2 who placed highly enough in the UK version of the tournament to get to fly over to Israel and have a shot it it over there. Since I did most/all of the electronics and control system for our entry, I thought I’d write a blog post about it!

Essentially, the idea behind the competition is to build ‘safes’ - essentially boxes with physics-related puzzles and challenges that must be completed in order to ‘crack’ the safe, with the point being that only an understanding of the physics involved would let you unlock it. Our safe, the Physics Penitentiary3, looked a bit like this: 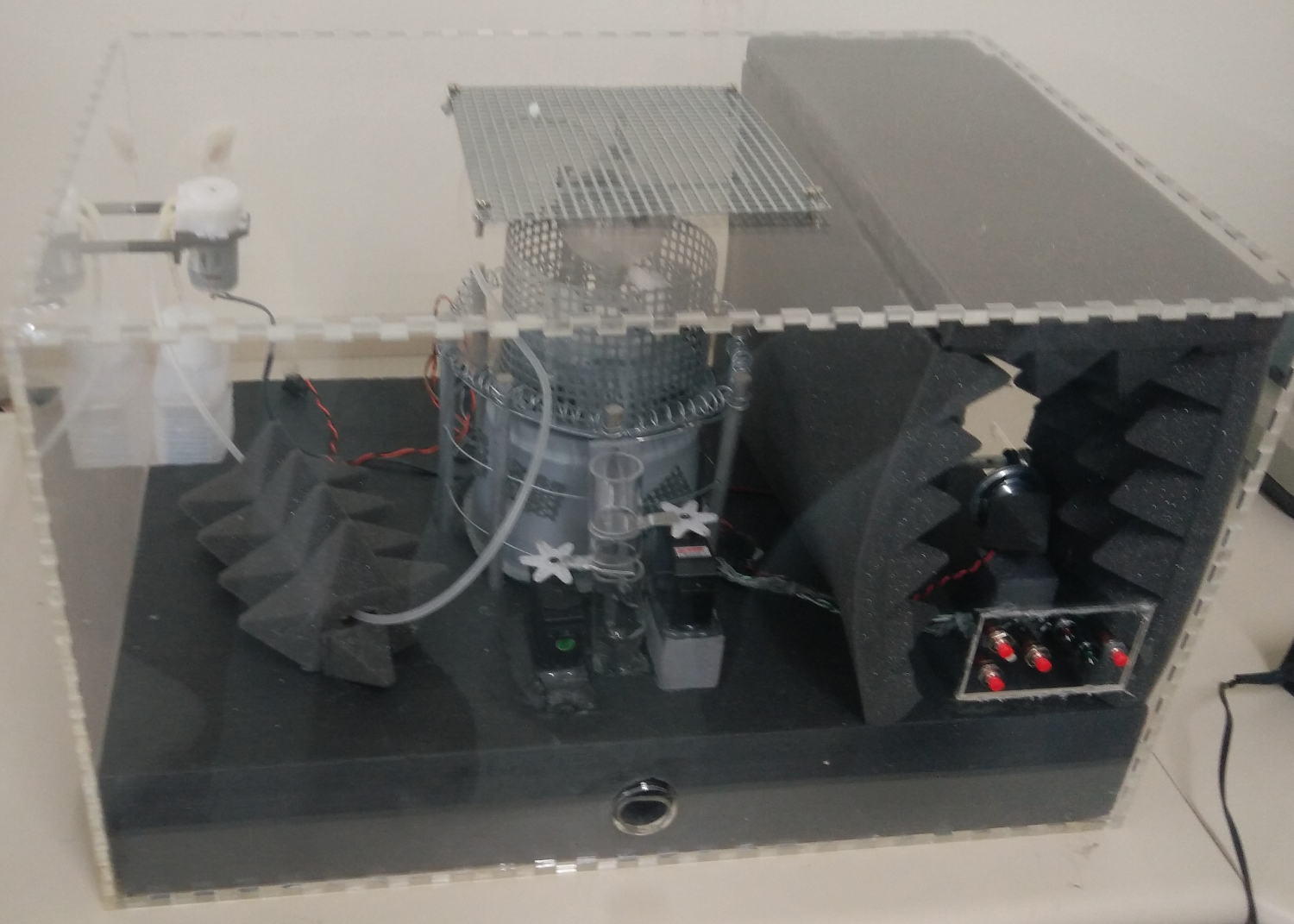 So, I’m not a physicist by any means (which led to some fun discussions about what a random CS student was doing taking part in a physics competition, but we’ll gloss over that…), which means I have only a loose understanding of the physics. That aside, what was in the safe roughly looked like:

In addition to this, you were allowed:

With this, you had to ‘crack’ the safe by figuring out how the Crookes radiometer worked - essentially, due to some physicsey explanation I don’t quite comprehend4, the radiometer would spin if it was heated (e.g. by shining an inefficient tungsten bulb on it), and would also spin, but in the opposite direction, if you cooled it again (e.g. by inverting the canister of compressed air to get at the incredibly cold gas and spraying that on the surface of the radiometer). We also added the sound-based challenge seen to the right, where you had to get the two sound waves to match frequency and wave type (e.g. sine, square, or triangle) in order to cancel each other out5 - to make it a bit harder, and also to fit with the ‘prison’ theme.

Above: nifty GIF of the radiometer doing its thing. Image courtesy of Nevit Dilmen on Wikimedia.

However, one important detail is still missing: how did the safe actually detect which way the radiometer was spinning, if at all? In planning, we sort of hand-waved this issue away with vague talk of ‘lasers’, ‘infrared’ and ‘proximity sensor hackery’, but it turned out that detecting the spin direction was one of the hardest challenges we had to solve - and the solution was nearly all in code as well, which makes it interesting to talk about!

So, we had a problem. The problem was made harder by a number of restrictions:

In the first revision of the safe (the one that we presented at the UK finals), this was accomplished using a generic chinesium proximity sensor we managed to procure from eBay pointed at the radiometer, and some very very questionable heuristics - to give you an idea, we only managed to get the heuristics to work semi-reliably on the very day of the competition itself, and even then, the output of the sensor detection algorithm was fed into an array of 5 recent readings, and we’d take the majority value out of these five to smooth out the inconsistencies (!)6. Very little science was involved in getting this to work; we7 just threw code at the problem until something semi-worked.

Needless to say, such a solution was not going to fly (quite literally8) at the international competition, so, after our miraculous success at the national finals, we needed to think of something else.

The solution we eventually settled on involved using a Vishay VCNL4010 proximity sensor (and SV-Zanshin’s wonderful Arduino library). This sensor had a number of nice features that made us choose it: 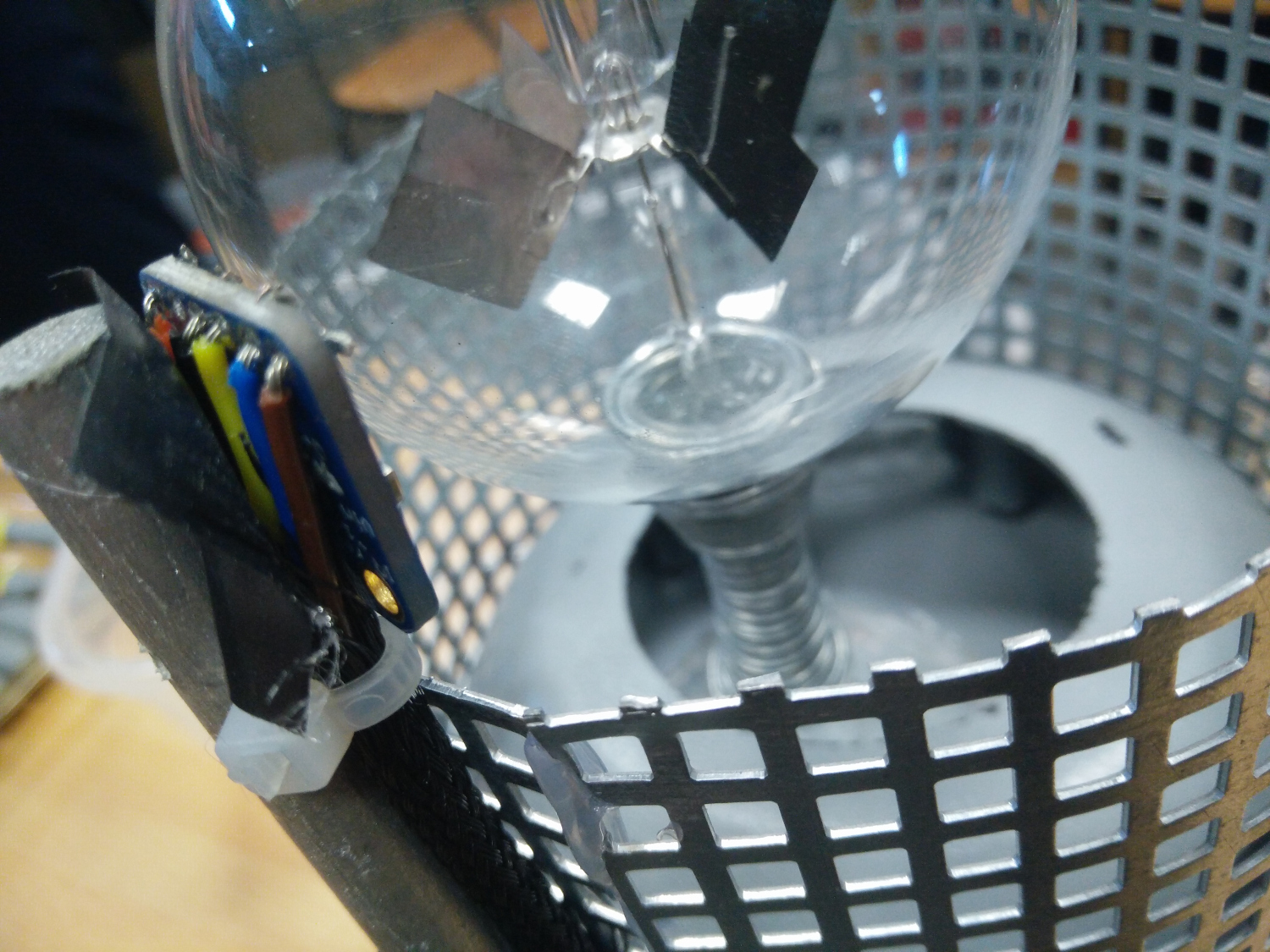 Above: one of the pictures we took of the sensor alignment during testing. Note the neat use of braided sheathing to make cable management not painful…

With the actual hardware sorted out, as best we could (positioning the sensor was painstakingly hard, and required multiple attempts to get it to work properly), the next remaining challenge was actually making sense of the proximity data.

Of course, a proximity sensor only gives you a reading indicating how near or far something is, in arbitrary units; you still need to do some processing to figure out spin direction (spin frequency is relatively easy to determine, but we didn’t really care about that much here). In theory, this should be relatively easy: if the sensor is spinning in one direction, the proximity should be increasing (modulo the spike down every now and then), and vice versa for the opposite direction. Indeed, if you plot the readings on the graph, you get something looking like: 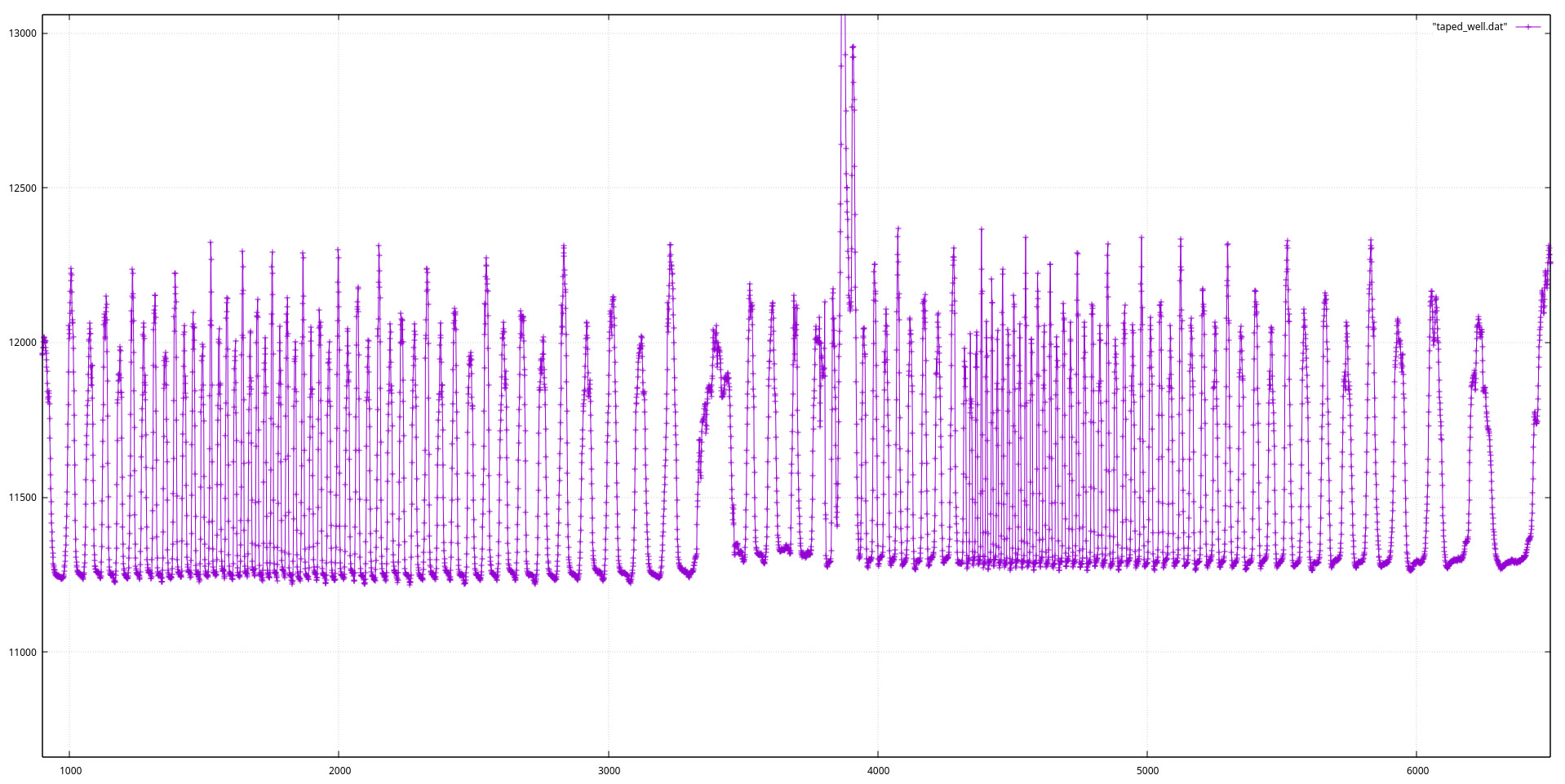 Above: a plot of the radiometer proximity data, taken from the sensor. The first half of the graph shows it spinning in one direction, then it changes at around the 4000 mark on the x-axis to spin in the other direction.

Looking at this (probably somewhat tiny) plot, a pattern is somewhat distinguishable: the troughs of each of the spikes have a different gradient, depending on which direction the radiometer is spinning in - somewhat as we’d expect, from the description we gave above. This reduces the problem to:

The first bullet point was solved with some hacky application of elementary statistics - we kept a buffer of the last 256 data points received from the sensor, calculated their mean and standard deviation, and excluded points that were above mean - (stddev / 4) (with the divisor determined experimentally; 4 seemed to work well enough). This isolated the points to just the few points at the bottom of the trough (or something approximating that). 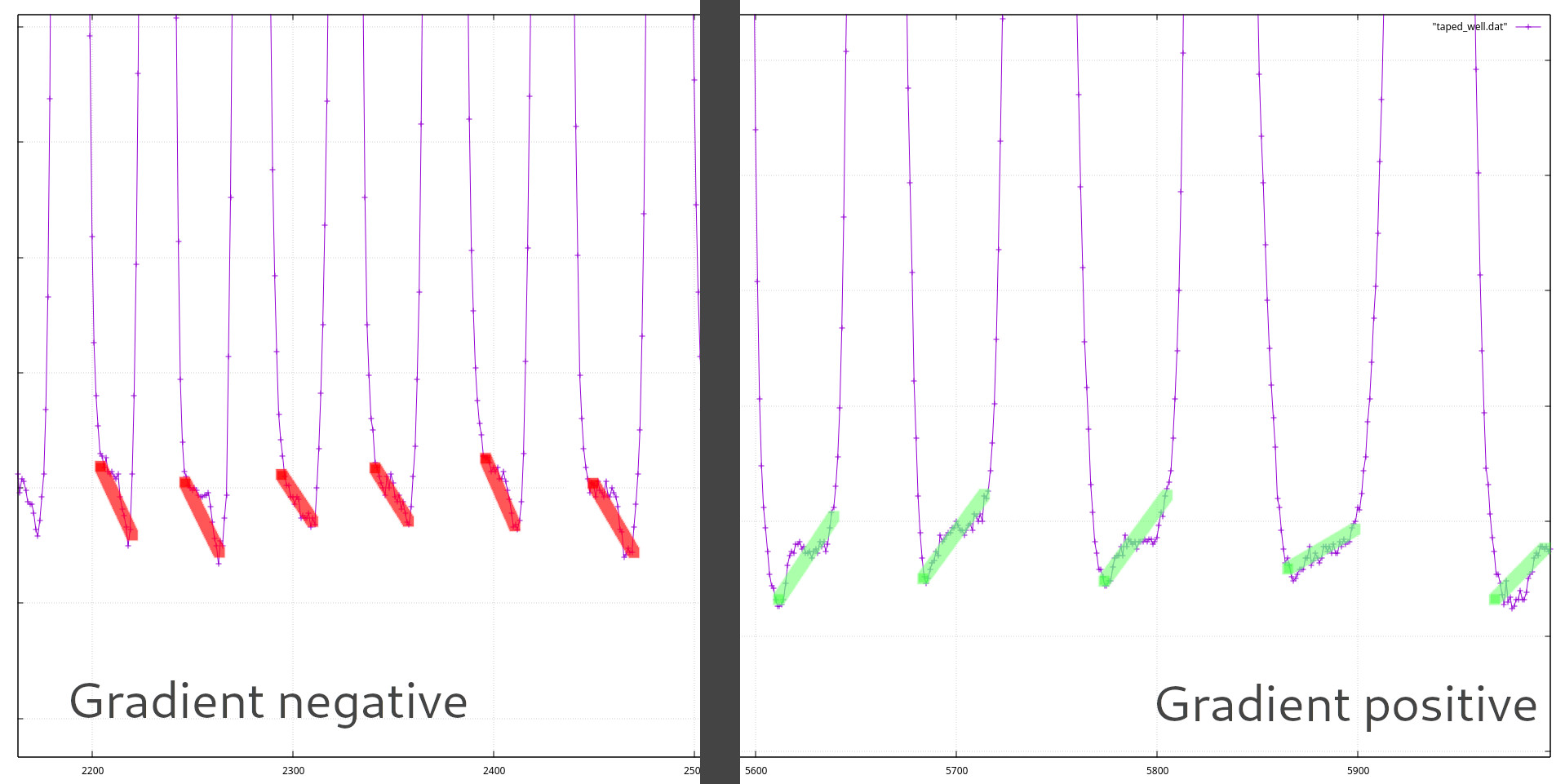 For the second, it was time for…some more elementary stats! As might be obvious, a simple linear regression sufficed, giving us a regression line and its gradient to work with. To prevent data points from being calculated from not enough data, we also prevented regressions from being carried out on data with an insufficiently high range, and rejected results with a low R-value. This finally gave us something vaguely capable of determining the spin direction - and we’d also require 3 or so concordant readings in order to actually come to a judgement, to minimize the chance of random errors. (Remember, a false positive would result in the challenge instantly unlocking, so we wanted to be sure; better to have the cracker wait for 5 seconds or so than to have it randomly unlock out of nowhere!)

Oh, and the issues with the user being able to spray frost (or ethanol) at the sensor were resolved by…judicious use of tape covering the sensor, so nothing could get in at it (!). We also added some tissue paper, so that the ethanol wouldn’t run everywhere and ruin the rest of the safe. 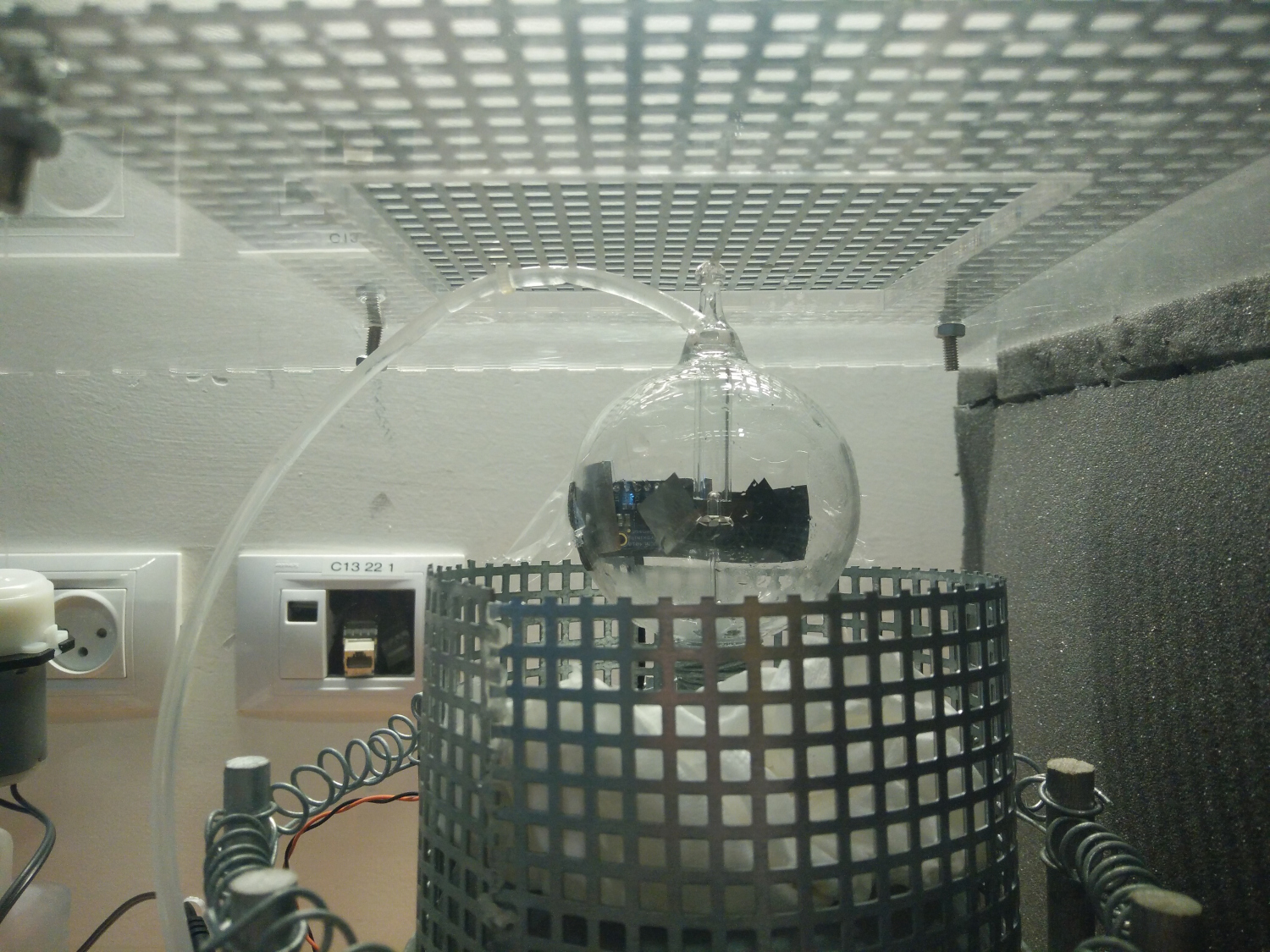 Above: If you look closely, you can just about make out the tape on the other side of the radiometer…

What about the rest of the electronics?

This whole thing was done using STM32F103 microcontrollers, actually - the first revision of the safe used a Blue Pill (see linked blog post for more), while the second revision used the somewhat more reliable Maple Mini. The STM32s were definitely a big plus; they were pretty small, for one, which meant we could stuff the electronics underneath the radiometer (an Arduino Uno would definitely not have fit in!), and their speed (and 32-bit address bus…) made doing calculations like the above regression stuff actually feasible. I used the STM32duino IDE and tooling, primarily because writing drivers (for things like the VCNL4010) didn’t seem like my idea of a fun time (!). 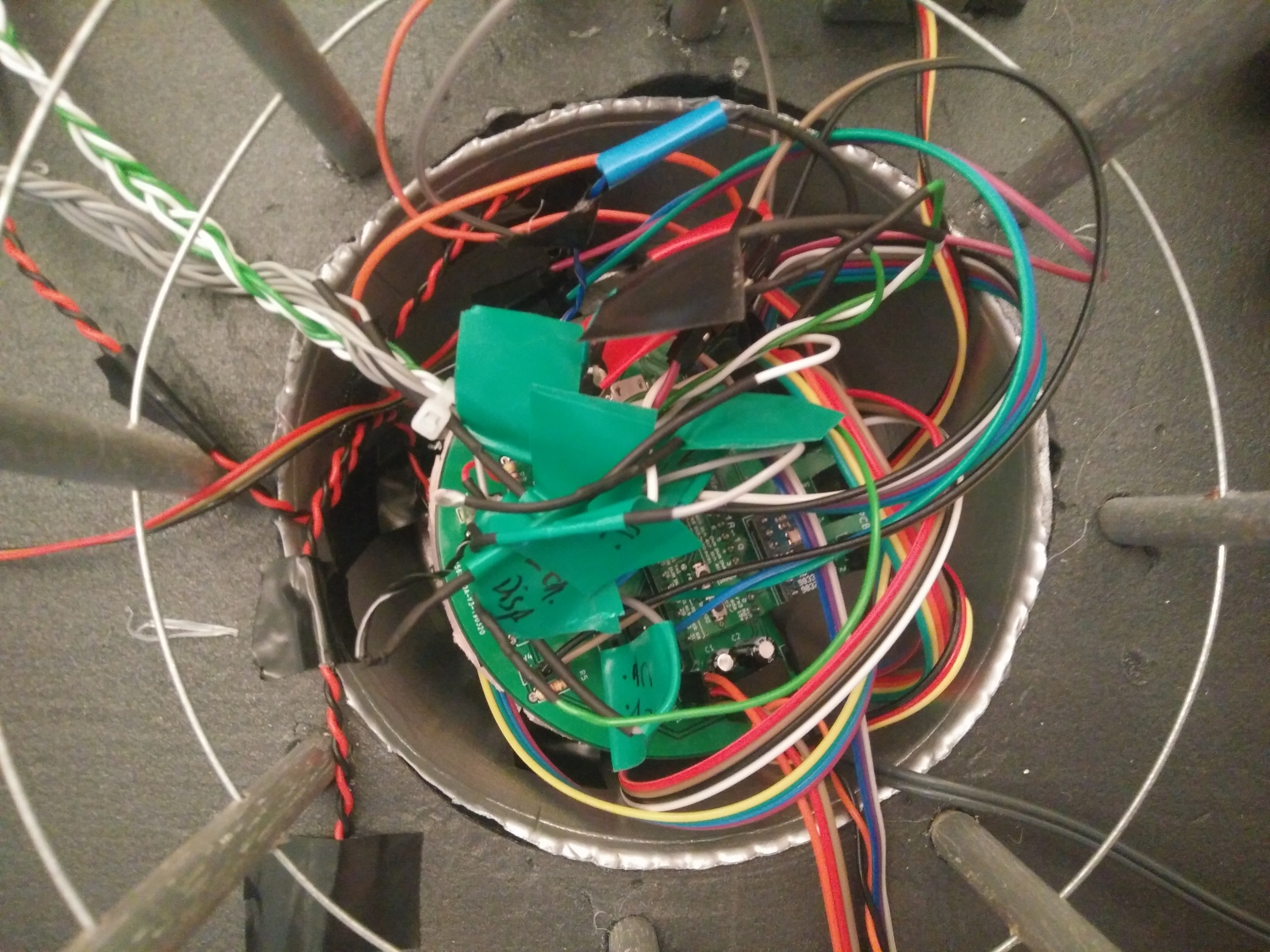 Above: most of the electronics and cabling, stuffed into a well below the radiometer during construction. Connecting all the wires was pretty difficult!

To put things into context, the original revision didn’t use a PCB at all, and instead had tons of flying wires connecting everything on a piece of protoboard; we decided that making a proper PCB for the second revision might be a good idea, so we did: 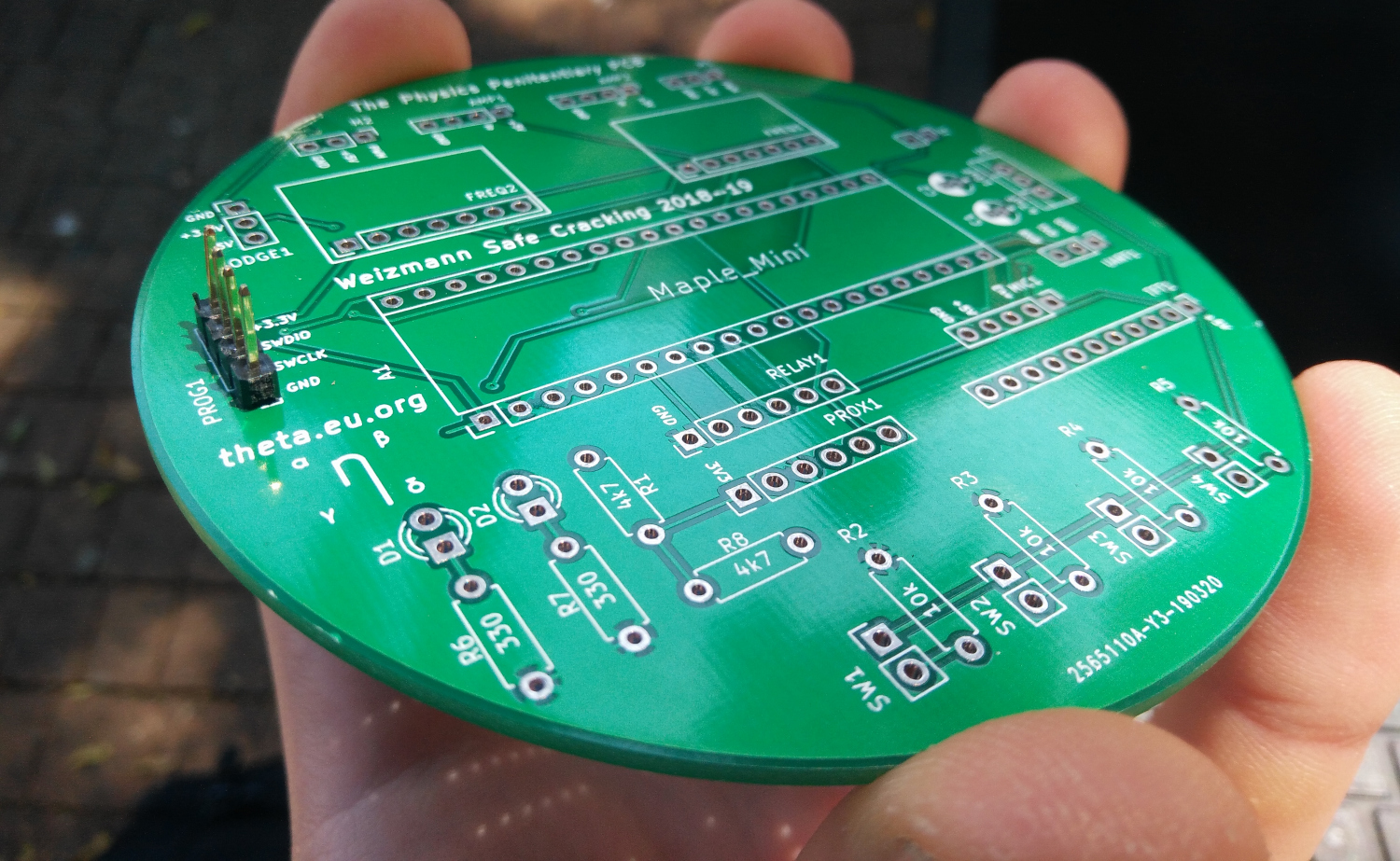 Above: artsy shot of the PCB made for the project, with gratutitous theta.eu.org logo in focus.

In total, the electronics ended up being made up of:

As with the Systems CAT, this code is intended to be looked at, rather than used (if you consider yourself patient enough to spend time untangling it, that is!). However, you might find it interesting:

Right, that’s probably about enough information for one blog post; it’s been upwards of 2000 words, after all! Hopefully some of it was vaguely informative / interesting; it’s also worth keeping in mind that the actual process of building this thing was significantly more chaotic and panicked than it might seem (c.f. the footnotes below). However, it was definitely a fun thing to build (despite not doing well in the international finals, sadly!)

Do let me know using the comment thing below if you have any more questions about the safe, or feedback; it’s always nice to receive comments!