I don’t use any social media (apart from Mastodon, which I briefly flirted with for a while earlier this year before letting the accounts I’d made fall into disuse). I have many reasons, and the arguments against social media have been done to death, so I won’t bother restating them here - apart from one. I think it’s important to consider the effect social media - and other technologies! - have on the amount of data we produce, and whether or not having all of this data around is a good thing.

If you do use social media, you likely produce quite a bit of data about yourself on a semi-regular basis. If you’re really eager, your profiles may be an hourly blow-by-blow of your feelings, thoughts, and experiences; if you aren’t, your profile may be a little more relaxed and pensive. The social media companies care about this data - after all, that’s why they’re giving you the social media service for free - but do you? For most people, I’d wager that the utility of the data on their social media profile probably decreases as time goes on - what you thought about your lunch today or yesterday may be interesting, especially if people are still replying to it, but you likely have zero interest in what you had for lunch 50 days ago. Indeed, on today’s modern platforms, you’d probably have to do a fair amount of clicking through pages of data in order to access the stuff you posted 50 years ago (again, this varies with posting frequency), so you likely don’t worry about it. Nobody looks at that stuff, right?

Well, not quite right. Search engines, for example, are notorious for crawling through every word you’ve ever posted online and making it easily accessible. Advertising and analytics companies analyse your posts, looking for clues that you might be interested in their brand new product in order to serve you more relevant ads. Facebook itself occasionally sends you reminders about what you did a long time ago, in the interest of injecting ‘blasts from the past’ into your timeline to make it somewhat more interesting.

The thing is, though, my original statement was partially right. No human looks at that stuff - this kind of data-trawling is a pretty new activity that people have never really bothered or managed to do. If you weren’t someone who should have a place in the history books, most minutiae about your life would be very quickly forgotten and lost, irreversibly, in the sands of time. After all, nobody has a memory good enough to remember what you said two years ago today, much less any caring for what happened then. As humans, we naturally forget about things that aren’t relevant - it’s part of keeping us sane, after all. As the learning process of spaced repetition tries to combat, memory retention has a natural ‘forgetting curve’ that prioritizes information we see more frequently, or information that is relevant to us, whilst trashing the rest.

And, of course, sometimes things that might seem irrelevant to you might be stupendously relevant to someone else. If you manage to annoy someone on the internet, they now have an unprecedented corpus of information with which to effect your downfall; there’s usually something you posted on social media once in your life that you probably wouldn’t want to widely publicize, yet it’s now possible for angry blackmail-searchers to do just that. This works excellently in conjunction with how hard it is to unambiguously convey tone on the internet - as inimitable Rust contributor brson exemplifies in The Minimally-Nice Open Source Software Maintainer:

It’s well understood that conveying tone on the internet is hard:

What does that period mean? It looks so gruff. Are they pissed at me?! Are they having a bad day? On the internet the simple period can appear sarcastic, or angry. It’s so neutral that people will project whatever emotions they want on it.

Or you could take this example from The Oatmeal, demonstrating how simple punctuation can vastly change meaning: 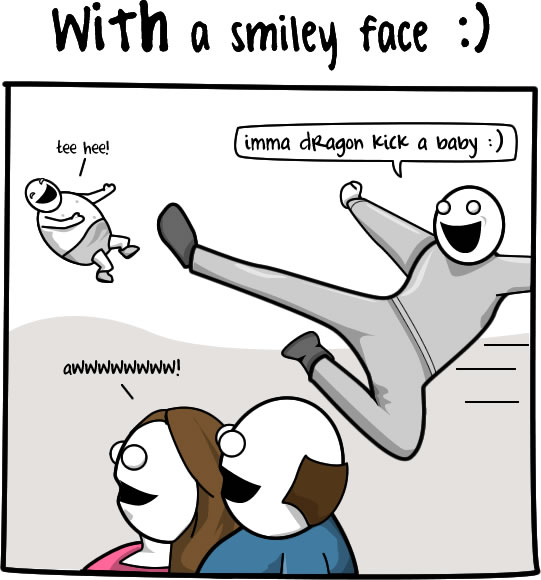 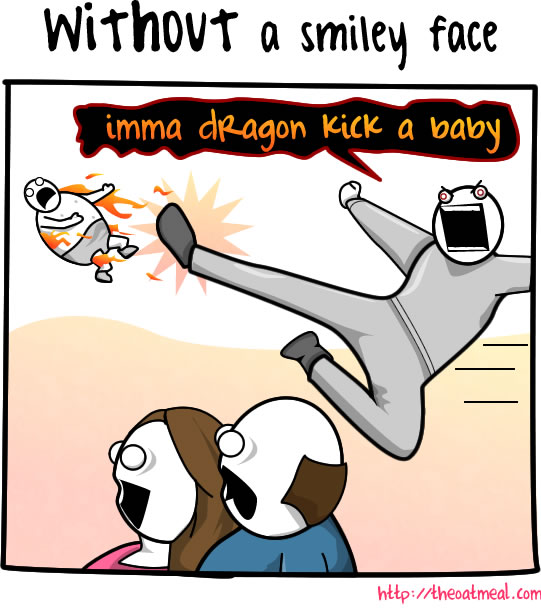 A more fundamental reason to worry about your data is the fact that your data is yours; it’s your property, so you should be able to do what you like with it. If your social media posts were handwritten letters, how would you organize them? Would you throw them all in the bin after a while, or would you keep the ones you liked and bin the rest? If a bunch of your letters were kept in a box in your friend Twitter’s house, would you go and get them eventually? How long would you leave your stuff there? We don’t tend to treat digital data in this way - but sorting through your digital life should probably occupy as much time as sorting through things in your physical life. If you’re the sort of person who bins everything after they’re done with it, why not do that online as well? On the flipside, if you do like keeping mementos of the past for your future self, why not spend some time doing that same curation process with your digital things?

I’ll leave you with some words from this very similar blog post by Alex Schroeder:

[…] We are built to forget the information that is not relevant. Forgetting is important.

The alternative, the thing that we’re building right now, the default future if you will, is the exact opposite. We’re building a panopticon where the rich and powerful can keep watch on us, where surveillance capitalism reaps the fruit of our data and we can’t trust a single website. […]